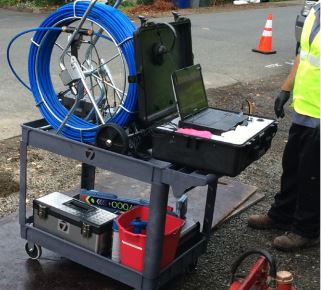 The JD7 team was contracted to use the Investigator system for an internal pipeline assessment of approximately 300 feet of the 12” water main. JD7 was able to confirm that a section of the line between the complex and the water department was heavily tuberculated, causing the flow restriction by locating a previously unknown fitting with a reducer. At this T-fitting it was also determined that there was a water line not shown on any water department maps, and remains a mystery.

Now that this flow restriction has been identified, the property owner can properly plan their budget for the next phase of expansion. “I have had experience using sewer cameras and various sewer snakes and was shocked at how easy it was to feed the JD7 Investigator upstream. I personally wanted to operate the device as I did not think it was possibly to feed a pushrod system so easily in a line,” Mr. Marshall.