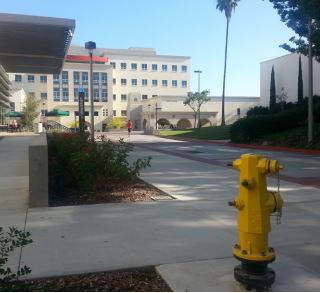 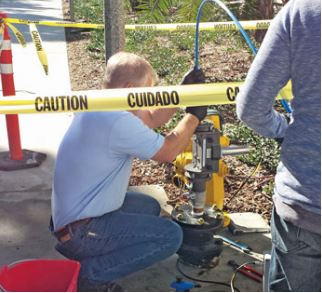 Shortly after HPS Mechanical, a large-scale mechanical contractor, installed 550 feet of 6” C900 PVC water main as part of a reconstruction project at San Diego State University, an issue arose in which water was appearing to run into a steam vault located in the newly reconstructed and paved street.

JD7 was granted access to the system via a fire hydrant that was removed by HPS Mechanical. To launch the Investigator system, JD7 placed an adaptor plate on the hydrants spool and launched the investigation system into the water main using a 320-foot push rod. A closed circuit camera and hydrophone was set up to allow the technician to hear what was displayed on the monitor. The hydrophone turns the sound into frequency for verifying the source of the leak acoustically.

After inspecting the recently installed main line, JD7 determined that there were no leaks in that portion of the system and continued the inspection into an existing fire hydrant branch that was not part of the reconstruction. As JD7 continued the investigation through the existing fire hydrant, it was clear that the pipe was deflected from a misaligned mechanical joint under the sidewalk.

“JD7 stopped a war that was brewing,” said Loren Waldapfel, HPS Mechanical project development. “Couldn’t be happier with the technology, and how it performed.”